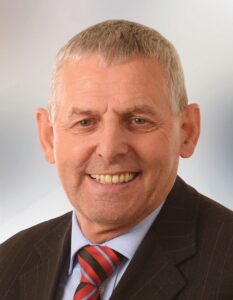 A retired farmer, Kevin is a full-time public representative, and has been since he was first co-opted to take Denis O’Reilly’s seat in 1988. He has been returned to serve at each subsequent election. He is married to Eileen and they have four children and six grandchildren. An experienced, capable and dependable elected member, he has been the party leader in Cork County Council, Group Chairperson of the Cork County Council from 1988-1999 and served as Mayor in 2011-2012. Kevin is also a shareholder in Bandon Co-Op. He supports Kinsale GAA club and Kinsale Soccer AFC and he is a member of Kinsale Golf Club. Kevin continues to work as hard as he has done for almost thirty years to make sure all the people within his local electoral area are well looked after and represented – he is the people’s voice in County Cork.