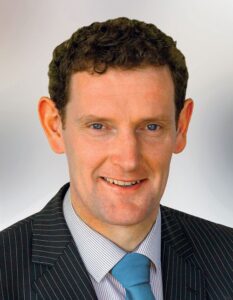 Colm Markey runs the family farm in Togher, County Louth. He was first elected to Louth County Council in 2009 as a councillor for the Mid-Louth area. Since then, he has secured €750,000 in funding for local recreation and community facilities within the county. Colm is also the current chairman of the Louth Leader partnership which has helped to establish over 200 sole traders and small businesses in the last 12 months. As a former national president of Macra Na Feirme (2005-2007) he was responsible for negotiating on behalf of 8,000 members at both Government and European level. Colm is a believer in politics which brings accountability, minimises waste and inefficiency and seeks to bring a high level of debate to the public. Outside of politics, Colm is a season ticket holder with Dundalk FC, a member of Naomh Fionnbarra GAA club and a keen follower of the Louth senior GAA team.

Colm was elected as Cathaoirleach of Louth County Council for 2017-18.