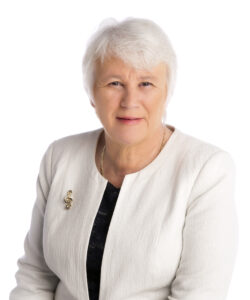 In her current brief, she is responsible for the implementation of the National Drugs Strategy; “Reducing Harm, Supporting Recovery – a health led response to drug and alcohol use in Ireland 2017-2025”. She is also responsible for ‘Healthy Ireland’; the national framework for improved health and wellbeing.

Catherine was first elected to the 30th Dáil on May 24th 2007, representing the constituency of Dublin South Central. She was subsequently re-elected to the 31st Dáil in 2011 and the 32nd Dáil in 2016.
She was a member of the Oireachtas Committees on Health, and Education and Social Protection during previous Dáil terms.

Catherine also worked in local politics and was first elected to Dublin City Council in 1999, where she served as a Councillor for the South West Inner City until 2007. During this time she was privileged to hold the office of Lord Mayor of Dublin from 2005 to 2006. She initiated the Unsung Heroes Awards, and bestowed the Freedom of the City of Dublin on Ronnie Delaney and Bob Geldof.

Catherine went to school at Our Lady of the Wayside N.S. Bluebell, and the Holy Faith Convent, Clarendon Street. She has completed a Lay Ministry Course in All Hallows College and also holds a City and Guilds Diploma in Catering from DIT, Cathal Brugha Street.

She has been heavily involved with community and voluntary groups in her community for over 25 years. She has served as Chairperson of St. Michael’s Community Centre and on the Board of Management of the Mercy Convent Secondary School, Goldenbridge.

She has a love for music and was leader of St. Michael’s Folk/Gospel Group for 15 years.

Catherine lives in Inchicore with her husband Joe. She has five children and seven grandchildren.

Fine Gael TD for Dublin South Central and Minister of State at the Department of Health, Catherine Byrne, has welcomed the publication of the final scoping report on Inchicore and Kilmainham by retired Assistant Garda Commissioner, Dr Jack Nolan.

A NEW primary care centre for Dublin 12 has been confirmed by Fine Gael Minister Catherine Byrne.

Fine Gael TD for Dublin South Central and Minister of State at the Department of Health, Catherine Byrne, has welcomed the appointment of retired Assistant Garda Commissioner, Jack Nolan, to undertake a scoping exercise in the Inchicore and Kilmainham areas.