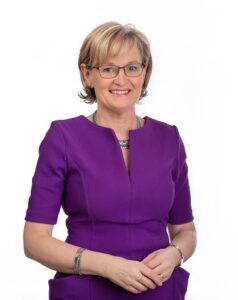 Mairead McGuinness is the First Vice-President of the European Parliament and represents the Midlands-North-West constituency.

She was first elected to the European Parliament in 2004 and is now in her third term.

She is a member of the Parliament’s Agriculture and Rural Development Committee, the Environment, Food Safety and Public Health Committee and the Constitutional Affairs Committee, the committee with responsibility for overseeing the Brexit process.

In her role as First Vice-President, Mairead oversees relations with national parliaments. She also has responsibility for Parliament’s dialogue with religious and non-confessional organisations on EU policies.

Mairead also chaired the Consumer Liaison panel set up by the Minister for Agriculture and Food. This panel spearheaded important changes in food labelling and traceability, initiatives which Mairead has continued to champion as a Member of the European Parliament’s Agriculture and Rural Development Committee.

She was voted by her colleagues as MEP of the Year for Agriculture in 2011. In 2014 she was awarded  the UCD Foundation Day Alumni Award in Agriculture and Food Science.