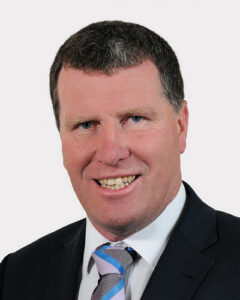 Born and raised in Johnstown, Co. Kildare, Anthony attended Naas CBS, Newbridge College and graduated in Agricultural Science (UCD) in 1981. Having completed a HDip in Education and spent a brief spell as a teacher in Naas VEC school, Anthony travelled to Vanautu for 2 years. Here he worked as a teacher with the charity Voluntary Services Overseas (VSO).

He returned to Ireland and continued teaching in Maynooth Secondary School before he embarked on a career in the agricultural sector. It was at this point he became involved in community activities and local politics.

Having lost out in the General Election in 2016, Anthony was elected to Seanad Éireann in April 2018, winning a bye-election on the Agricultural Panel.

An avid sports fan, Anthony is a great Kildare GAA and Leinster rugby supporter.  He is a former President of Naas Rugby Club, and is very involved with local GAA.