Deputy Peter Burke, Fine Gael TD for Longford Westmeath has this week slammed the new position taken by Fianna Fáil over excessive use of water, branding the approach as that of a new a “Fianna Fáil-Sinn Féin Alliance”. Burke said this new level of populism flies in the face of those who sacrificed so much to stabilise our economy, and will put our current and future budgets at risk.

“The statements from Fianna Fáil this week, which propose to all but reward those who deliberately over-use water, display a new level of populism for Mícheál Martin’s party. There have been recommendations from the Expert Commission set up to examine water, advice by the Attorney General, Departmental advice and a clear stance set out by the European Commission about excessive use of water.

“However,  certain members from the Committee which was set up to look at these findings, including Sinn Féin and Fianna Fáil deputies, are refusing to accept that anyone in this country should have to pay a penny for using water in an irresponsible manner as set out under the polluter pays principal. This is totally irresponsible and exposes Ireland to colossal fines backdated to 2009.

“The Attorney General, the European Commission and the Expert Group are crystal clear on this; those who actively and unnecessarily use excessive water must pay some charge.  This amount will be well over and above the normal amount that a family would use. I would also be strongly in favour of exemptions for people who need extra water due to illness or disability.

“If we do not impose a levy on those who exceed the average amount, the taxpayer will be open to huge fines and we as a State would be crying out unconstitutional actions according to the Attorney General. As an elected TD and a representative for this constituency, I could not stand over such actions. For Fianna Fáil to try and force a Government to bring forward legislation deemed unconstitutional by the AG shows us that the ‘Soldiers of Destiny’ have walked away from the constitution.

“We also cannot forget that 64% of all people have paid their water charges, an amount which comes to over €100 million. These 64% of people must get a refund if water charges are abolished, we cannot have a situation where citizens who obeyed the law of the land get penalised.

“What I find even more irresponsible and downright unfair about Fianna Fáil’s stance is that the 190,000 people connected to group water schemes and the 170,000 private wells which serve families across the country will still operate, being funded by responsible community individuals who are forced to pay for good quality water and have been for years.

“For Fianna Fáil to pander to populist politics such as this is a new low. It is clear that that our water charging system must be reviewed, and I understand Fine Gael will support a set allowance for every family, with incentives to conserve water and excessive usage subject to a reasonable charge. We are also going to examine the grants for private water schemes.

“What Fianna Fáil are proposing is a free for all, with no extra revenue to invest in water infrastructure and no thought for when the European Commission come knocking with hundreds of millions worth of fines in a couple of years’ time. And this is all for the sake of another bump in the polls. Fianna Fáil have changed their position so many times on water over the past few months, in an attempt to jump on the most popular bandwagon of the season.

“Their approach to water charges proves that Mícheál Martin and his colleagues have learned nothing from its past mistakes and raises serious questions about whether they can be trusted with power again.  Fine Gael continues to be prepared to make the decisions in the interest of constituents and if it will mean that our water supply is secure, modernised and paid for in a fair and equitable manner, then we will take whatever comes our way .” 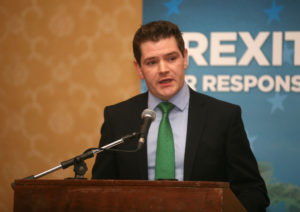 Peter Burke was appointed Minister of State with responsibility for Local Government and Planning on July 2nd, 2020. Peter is…

Sinn Féin have failed to provide or suggest any meaningful approaches to tackling the Covid crisis, instead exploiting the pandemic…

Sinn Féin still believes there is "no place" for Special Criminal Court to take on gangs, according to Fine Gael…

Minister for Planning and Local Government Peter Burke TD met the President and Officers of Marca na Feirme today, together…