Minister Brophy announces To Be Irish programme, an initiative to connect our global diaspora 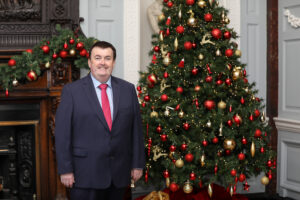 Today, Minister of State for Overseas Development Aid and Diaspora, Colm Brophy, T.D. announced details of an exciting programme of events streamed at tobeirish.ie. The aim is to connect our diaspora around the world during the holiday season.

The online platform allows us to share and swap our own special memories of Irish Christmases, and celebrate many of the things we love about being Irish.

Some highlights of the programme include:

Speaking today, Minister Colm Brophy said: “I am delighted to announce this exciting programme of events which will be available to everyone, both at home and abroad, during the festive period. From traditional music to pantos, cooking festive treats, to seeing the Irish landscape through a new perspective, there will be something for everyone in this programme.

There will be new material made especially for this project and we will also have access to archival material so you can revisit your own memories of Christmas past. We have a number of new initiatives such as ‘Dear Santa’ and ‘Things Remembered’, which we hope will create some new memories of an Irish Christmas. During a Christmas like no other, we hope that To Be Irish at Christmas can showcase Ireland at its best to the world.”

Colm Brophy was appointed Minister of State with responsibility for Overseas Development Aid and Diaspora on July 2nd, 2020. He…

The Minister of State for Overseas Development Aid and Diaspora, Colm Brophy, T.D. today (1 December) announced details of To…

Minister for Overseas Development Aid and the Diaspora, Colm Brophy T.D., today opened the call for applications to Irish Aid’s…

The Minister for Overseas Development Aid and Diaspora, Colm Brophy T.D., today pledged €2 million in additional support for the…