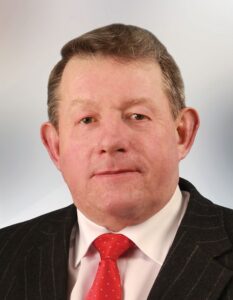 A family man married to Wilma, Winston was first elected to office in 2004, and works as a Dairy and Pig farmer. Winston is responsible for initiating the Executive Role of Honour, which pays respects to and remembers those 652 local Cavan men who lost their lives in World War One. As the Chair of the Taste of Cavan, this particular initiative is close to Winston’’s heart and he takes great pride in the leading role he played in organising this terrific local event which attracted over 22,000 visitors. Winston is very proud that this event was hugely significant as it provided local people with an opportunity to network and showcase their goods and fantastic locally produced foods and crafts, in particular artisan producers. Winston is continuously working with the County Council to ensure footpaths and lighting is up to standard in the local area. He continues to work tirelessly on an impressive cross border cultural initiative, and is committed to further deepening cultural and artistic cross border ties. He sat on the Irish Central Border Area Network (ICBAN) securing an impressive €3.1 million in funding to bring together musicians from Cavan, Sligo, Leitrim, and Fermanagh. He is heavily committed to serving the local people who elected him in every capacity.