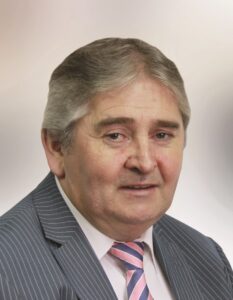 Michael ‘Mogie’ Maher was the Mayor of County Galway 2011-12. A native of Loughrea, Maher entered politics as a member of Loughrea Town Council in 2004, joining the County Council in 2007. Re-elected in 2009, he became a full-time councillor in 2010.

Maher advocates volunteer work, and supports both the Order of Malta and the scouting movement, being a former County Secretary for Scouting Ireland.