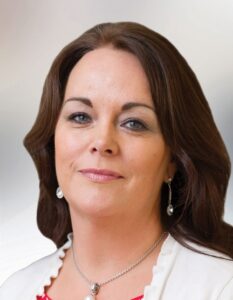 Suzanne Jamal is a mother of four children, and a businesswoman. She is married to Dr. Ahmad Jamal, a senior emergency medicine physician at Our Lady’s Hospital, Navan, and runs a home accessories business at Balrath.

She works for improvement of services and retention of jobs at Our Lady’s Hospital, Navan, and continues the work done by her Fine Gael colleagues in securing the location of North East Regional Hospital in Navan. Public health concerns surrounding Knockharley Landfill is also a priority.

Suzanne and Ahmad Jamal founded the Leonard-Jamal Relief Fund following the Pakistan earthquake in 2005. The Fund provided initial relief efforts, and, in 2006, built a primary school in Kashmir. The ‘Irish Public School’ school is completely funded and run by their charity and educates 80 children who would otherwise be deprived primary schooling. The Leonard Jamal Relief Fund has so far raised in excess of €200,000.

Suzanne comes from a strong political dynasty. Both she and her father, Jim Leonard, have served as Fine Gael members of Ballybay Town Council in Co Monaghan. Suzanne and her family have lived at Balrath for over 10 years. She previously worked as a medical administrator at Monaghan General Hospital and Connolly Hospital, Blanchardstown. During Suzanne’s tenure on Ballybay Town Council in the late 1990s, her work to ensure the welfare of the elderly was highly commended. She was also an effective campaigner for increased employment opportunities in the area.