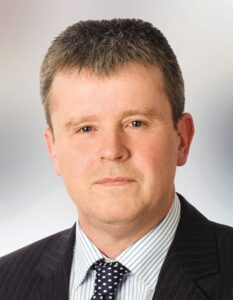 Edward Timmins has been a  member of Fine Gael since the 1980’s and a Fine Gael  member of Wicklow County Council since his first election in 2004.

Edward was born and raised in Baltinglass. Married with a daughter, he lives in Grangecon. A son of the late Godfrey, and younger brother of former TD Billy, he graduated as an Engineer from Trinity College, Dublin. He studied and worked in France, Germany and Switzerland, where he also learnt French and German, before returning to Ireland and qualifying as a Chartered Accountant. He works as a Finance Director in Blessington and was central to the company establishing operations in the UK, Spain and the US.

Edward was elected as Cathaoirleach of Wicklow County Council, for 2017-18.

His priorities as a Councillor include: