Left Bank Loop Would Add To West Side Story – McFadden 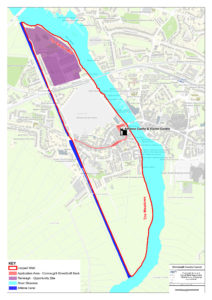 A 5km looped walk on the West side of Athlone would add to the amenity that already exists for locals and would give us an additional product to sell to tourists, according to Athlone based Senator, Gabrielle McFadden.

“The proposed ‘Left Bank Loop’ was just one of the many ideas that were discussed when I was working with local residents and businesspeople to consider ways in which we could develop the West Side of Athlone.”
“The Loop would start at the Luan Gallery, travelling north along the promenade, taking in the existing nature trail at the Golden Mile and the proposed development at the No. 1, turning back south and following the line of the canal through Talbot Avenue, Magazine Road, Canal Banks and along the existing path at the meadows, to its confluence with the Shannon at the southern end. Turning back north, it would follow the course of the river up as far as the Quay and Athlone Castle.”

“Much of this would build on infrastructure that is already in place and it would provide an enhanced amenity for walkers, joggers and cyclists as well as access for angling, birdwatching and boating. It would tie in with existing tourist attractions such as the Luan Gallery, Athlone Castle, Sean’s Bar and the Viking Ship Cruises and eventually link up with the greenway cycleway.”

“Anything that can bring new life and activity to the Westside is welcome. This is just one of many ideas which were discussed and form part of a proposal which was submitted to Westmeath County Council as part of an initiative to rejuvenate a part of our town that has a great history and fantastic potential.”