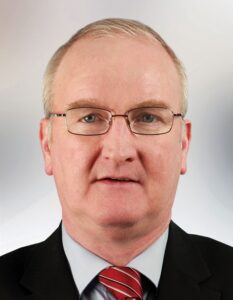 Peter has an exceptional record as an effective and dynamic public representative in Cavan since first being elected by the people to Cavan County Council in 1999. Married to Susan, he has three children and three grandchildren. As a haulier and warehouse owner in business since 1988 and employing thirteen full time staff, he has an acute knowledge of the complexities and challenges involved in running a successful business. He is aware of the significant role which tourism plays in Cavan and is actively taking steps to further develop tourism to boost the local economy. He is a skilled negotiator with an impressive track record. He has been involved in many major projects, among them creating a cross border Geo park between Cavan and Fermanagh, no easy feat, and he secured funding from both the Northern Irish and Irish governments. He is also committed to the success of the interpretive centre, a large development to attract tourists to the Burren beside BlackLion. He very much looks forward to continuing to serve the people of Cavan.