In welcoming the report, Minister of State for Business, Employment and Retail Damien English T.D., said “The WRC faced challenges during 2020 that were unprecedented owing to the impact of Covid-19.  However, it acted quickly to adapt its services and continue offering fairness and good work practices for employers and employees across the country.”

Minister English highlighted the success of the WRC in recovering €1.7m. in unpaid wages for employees over the year and concluded by saying, “the WRC will continue to play a pivotal role in assisting employees and employers in Ireland as we move towards a jobs-led economic recovery post pandemic.”

Dr David Begg, Chairperson of the Board of the WRC commented, “the year’s positive outcomes reflect very much the ambition of the Board to maintain dispute resolution, adjudication, advisory, and inspection services to a world class standard even in the most challenging circumstances.”

Mr. Liam Kelly, Director General of the WRC said, “Last year was very challenging for everyone and no less so for the WRC. But in that time the WRC, working with its stakeholders, and using the IT platforms now familiar to everyone, successfully re-shaped its adjudication service to a position where it is now scheduling hearings at a level that is over a third higher than were scheduled before Covid, provided an uninterrupted information service, continued to mediate and conciliate disputes, monitored and enforced compliance with employment standards and assisted in the safe opening of work for staff and public generally.”

Mr. Kelly concluded by saying the difficulties presented are undiminished but thanked the Minister, the Department and the WRC stakeholders for their support over the perThe report outlines the response of the WRC in continuing to deliver its services whilst observing public health guidelines and travel restrictions. 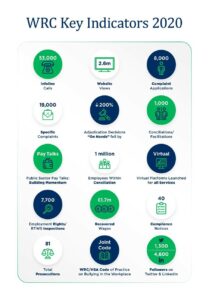 Damien English TD was appointed Minister of State for Business, Employment and Retail on July 2nd, 2020. He previously served…

Fine Gael TD and Minister for Business, Employment and Retail, Damien English, has today welcomed Tánaiste Leo Varadkar and his…