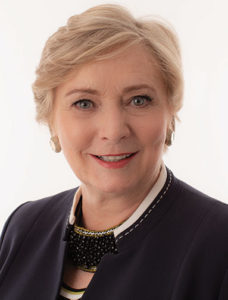 Frances Fitzgerald is a Fine Gael MEP for Dublin City and County. She is a member of the ECON (Economic & Monetary Affairs) Committee, FEMM (Women’s Rights & Gender Equality) Committee and DEVE (Development) Committee. Frances also serves as the lead coordinator for the European People’s Party on FEMM.

She most recently served as Tánaiste na hÉireann (2016-17), one of only four women to have ever held this position. She has also served as Minister for Business, Enterprise & Innovation (2017); Minister for Justice & Equality (2014-17) and was the State’s first Minister for Children & Youth Affairs (2011-14).

Frances has a clear record of delivering change and reform in Ireland stemming back to her education and early career.

Raised in Stillorgan, she was educated in Dominican College Sion Hill, Blackrock. She obtained a B.Soc.Sci from University College Dublin and a MSc. in Social Administration and Social Work from London School of Economics. She worked as a social worker and family therapist for ten years in Ballymun Child & Family Centre and in St. Ultan’s Children’s Hospital, St. James’ Hospital and the Mater Hospital. She worked in inner city communities in both Dublin and London. She also lectured in social work in Adult Education Courses and in Trinity College, Dublin.

She held the first conference in Ireland on ‘Women and Decision Making’ and championed the introduction of equality proofing mechanisms. Her trailblazing work on equality, her continued relentless progression of the principle of inclusivity and framework towards a rights-based approach earned her the title of European Woman of the Year in 1992.

Frances was first elected to Dáil Éireann in 1992, representing the constituency of Dublin South-East. Before the abolition of dual mandates, she was elected as a Councillor for the Rathmines ward on Dublin City Council in 1999.

Frances has served on various Dáil and Seanad committees including Justice, Health, the Committee on the Constitution, the National and Economic Social Forum, the Forum for Peace and Reconciliation, Social Affairs and Health. Frances was also a member of the Joint Committee on the Constitutional Amendment on Children and co-authored several Oireachtas Committee reports. She co-founded the first ever Cross Party Group on Mental Health and worked closely with Amnesty International to help break down the stigmas associated with mental health issues.

In 2011, Frances established the Department of Children & Youth Affairs. Frances also pioneered a number of ground-breaking reforms, including the comprehensive reform of the child protection and welfare system in Ireland. She enacted the Children and Family Relationships Act, which was the most comprehensive reform of family law since the foundation of the State. She oversaw the successful Children’s Referendum in 2012 and established Túsla, a dedicated Child and Family Agency. She introduced the Children First Legislation, putting guidelines on a statutory footing and led other major improvements on the promotion, regulation and enforcement of standards in early years and childcare settings. She also published the State’s first national policy framework for children and young people, titled Better Outcomes Brighter Futures.

In 2014, Frances was appointed Minister for Justice and Equality, where she enacted 27 pieces of legislation. The Sexual Offences Act radically reformed the laws regarding sexual exploitation and sexual abuse of children. It also criminalised the purchase of sexual services. She initiated the Domestic Violence Act which introduced the new offence of coercive control and improved the protections available to victims of domestic violence by introducing a new emergency barring order. She signed the closure of St. Patricks Institution in 2017 and also established the Charities Regulatory Authority. She also initiated and launched the National Strategy for Women and Girls.

Frances introduced legislation for the holding of the Marriage Equality referendum. On May 23rd 2015, Ireland became the first country in the world to vote in a referendum to introduce an equal right to civil marriage for same-sex couples. In November 2015 Frances signed the Commencement Order for the Marriage Act 2015 which officially made marriage equality a legal reality.

She oversaw a comprehensive work programme – leading to the finalisation and enactment of the Legal Services Regulation Act, providing for unprecedented reform of the regulation and oversight of the legal professions and legal costs.

Frances also led a programme of fundamental policing reforms, including a new independent Policing Authority to oversee the performance of An Garda Siochána and an expansion of the role and remit of the Garda Síochána Ombudsman Commission.

As Minister for Business, Enterprise and Innovation, she secured record funding in Budget 2018, established a Brexit Loan Scheme for small and medium sized businesses and worked to build new trading relationships and agreements abroad.

Frances sits on the board of Business in the Community Ireland. She has previously served on the boards of the Employment Equality Agency, Arthritis Ireland, The O’Reilly Theatre and the Breast Research Foundation in St. Vincent’s Hospital. Frances was also Vice Chair of Europa Donna, the European breast cancer campaign.

She lives with her husband in Castleknock, where she raised her three sons.

A Fine Gael European Election candidate has urged voters to ensure that Ireland’s representation in the next European Parliament is experienced to deal with impending critical scenarios post-Brexit.